A lot of artists that truly impacted my life died this year. Not to be insensitive or pessimistic, but it's not going to get better in 2017. See, age happens. Every day, we all come closer to the end of our lives. That's just how it is. Those that we look up to are generally older than we are, so we're bound to witness the end of some lives. It's no fun, but it's not because 2016 sucked any more than any other year. I'm trying to remind myself that birth is as common as death, and think of all the people born this year who are going to change the world. That's comforting, and vitally important. We are responsible for making sure they don't lose the creativity that's inherent in all tiny humans.

My own personal 2016 has been a mixed bag too. I started it with a severe ankle sprain and broken wrist bones, and so spent a lot of time with doctors and therapists. The good things that came from that include the lesson of asking for help (again), the knowledge that I hate Vicodin (though it does take care of that pesky pain), and the massive fun of telling every student a different story when asked me what happened (including "BMX," "ostrich racing," and "rival caroling gangs").

So there's good, even inside the bad.

And on that note, here are some of my personal/professional (because they're the same thing, in my life) accomplishments for the closing year:

Also, the lovely and talented Julie Denesha interviewed me about my love affair with Fringe.

- Almost, Maine, the fall semester school play. Yes, it's sweet. It's also deeply moving and hella smart. I'm going to have to direct it again. And I'm beyond proud of the dedication of these students, and their growth as actors and technicians. 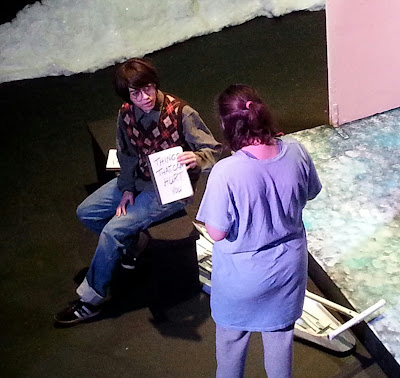 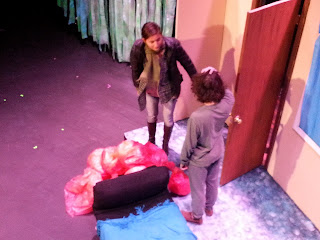 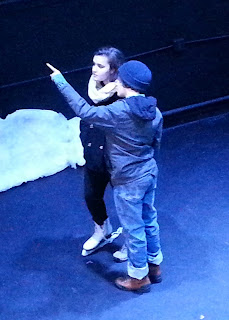 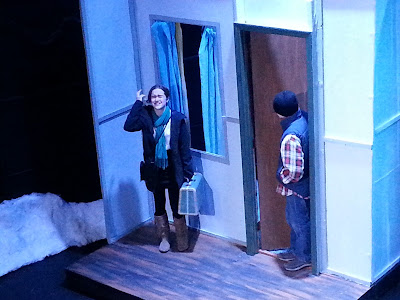 I performed in:
- "Now Grieve, Now Stop," my brilliant friend Laura Isaac's performance piece
- Baddest Auditions, at KC Fringe, in which I continued to evolve a character from the previous two installations.

I wrote:
- "MegaDamnGurl," a script for a devised scene in Gears and Queers
- "Clickbait" (ditto)
- "The Lost Generation" (ditto ditto)
- "Blood Moon II," a short piece of a larger piece that doesn't know yet what it's going to be when it grows up.
- "Royals" (same)

Yeah, no scripts, but I've been researching some story ideas that are flittering around in my brain.


I A'ed some Qs for:
-The Unicorn's staged reading on our newly-expanded script for Sexing Hitler.


I drew:
Among other random things...


I've also been working on a mural at school, in the hall outside of the theatre, in my "spare" time.

I sang:
For my - I don't know - twelfth? season, as a Dickens Caroler.

I taught:
- Intro to Theatre (middle and high school), at Kansas City Academy


- "Legends and Mythmakers," a Coterie spring class
- "Magic Tree House," Coterie - pretty much entirely devised by the 2nd-4th-graders in the class. Fun, but so. exhausting.
- "Scenes with Sherlock Holmes," Coterie

...which brings my count, since 2012, when I thought to start keeping track, to 964 acting, stage makeup, theatre exploration, and playwriting students. Dang. How is that possible?


I'm currently spending most of my time researching lesson plans for my spring classes at KCA and The Coterie, but I have some script ideas that need attention too. If anyone has an extra couple of hours per day they're not using, I swear I'll fill them up with good, solid arts education and thoroughly-researched original scripts.