After taking last year's Fringe Festival off (actually, not really - we just helped others with their projects), Bryan and I are plunging headlong into 2017's Fringe... with two shows.

And I wrote them both.

We're producing (and I'm directing) my play, Variations on a Theme. Bryan is heading the second project, Variations on a Scene. I expect many people to get confused by the titles as they travel...  I mean, flock to... nay, storm the theatres to see them both. So I shall explain. 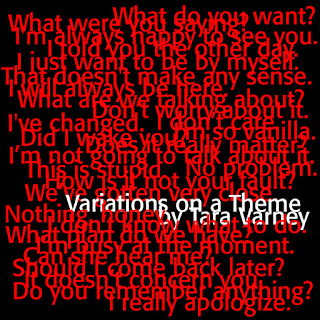 Variations on a Theme
It all started the summer of 2009. I was preparing for Lingerie Shop rehearsal, our second foray into creating our own theater, via Fringe. I was putting out some snacks, but had to wash some dishes first. As I suds up a spoon, the thought hit me, very hard: These people trust me to wash dishes the way they would wash dishes. That seems like a given, I suppose, because everyone wants clean dishes, but I know some people who have displayed questionable dish-washing skills. I realized my cast assumed that I was going to do it the way they expected me to. I also realized that they would be rather upset with me - and for good reason - if they discovered that, say, I'd washed the dishes without using soap, or with cold water, or that I kept them in the hamper with dirty laundry, or something.

Bryan and I had been living together for a couple of years at this point, and suddenly, any arguments we'd ever had (there aren't many to choose from, really) made sense. I learned to make oatmeal with milk and brown sugar; he makes oatmeal with water and butter. Clearly, he is wrong.

I discovered a link between this observation and a recurring stumbling block I encountered teaching acting classes. There's a standard improv game called "What Are You Doing?" It goes like this:

Sometimes, someone would say something that had multiple meanings, like "I'm painting a house." That could mean, "I'm using this paintbrush to apply paint and change the color of the exterior of this house." It could also mean, "I'm standing at an easel, with a palette in my hand, using this paintbrush to render an image of a house on this canvas." Which one is the correct interpretation? Both are, of course. The conflict arises when Actor 1 would tell Actor 2 that their interpretation was not the one they meant, and should change it to reflect the intention. No, no, no, Actor 1. Actor 2's interpretation is correct. You just assumed they would know what you meant. Hence, the link to my observation of different life experiences (and ambiguous phrasing!) leading to breakdowns in communication.

Then, of course, there are outside reasons for communication issues as well: to-do lists, schedule conflicts, phone calls, emails, project deadlines, current surroundings, literally speaking different languages... and dark moments in one's past, such as abuse, a house fire, a car wreck, the death of a loved one, divorce...

So this show's theme variations = road blocks to communication. Which isn't as heavy as it may sound, I swear. I mean, Three's Company ran for eight seasons, and every single episode was based on a misunderstanding.
Variations on a Theme is nine unrelated two-person scenes, and in each, someone has something they need to say, but for some reason, can't. Most are funny. Some are not. For a couple of them, I challenged myself to write completely outside of my comfort zone.

Variations on a Theme will be presented at the MTH Theater in Crown Center as part of the Kansas City Fringe Festival: 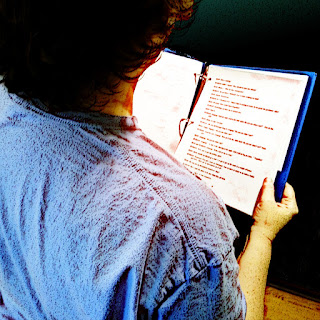 Variations on a Scene
I remember when I was doing my first play in high school, my dad asked me why it took so much time. I mean, every night? For weeks? I tried to explain about learning lines, and music, and choreography, and scene changes, and how that all multiplies by x-number of cast and crew members. Truly, at that point, I didn't know the half of it.

Most non-theater people are pretty ignorant of how a production comes to be. Being ignorant is not a bad thing. I'm ignorant of what all goes into brain surgery and carpet installation and the stock market and making a soufflé. All of those things (and so many more) mystify me. And I'm not inclined to learn about those things either. Other things want my time and effort.

Bryan thought people might be interested in peeking in on the actor's process. Makes sense. I'm asked about it all the time. (Particularly, "How did you learn all those lines?!") But, you know, an abbreviated actor's process. Because other things want your time and effort.

Now, if only we had a play that was made up of several short, stand-alone scenes... aha! Variations on a Theme will work just perfectly, thank you.

So Variation on a *Scene* puts two actors, Jay Coombes and Caroline Dawson, onstage, without having any idea what script they're about to be handed. They read it cold for the first time onstage, and the rest of the performance is them, rehearsing the same short scene, exploring the script, and making character and relationship choices.

We did a test drive of this concept several months ago, using different actors and a different script.
We got some good feedback. As it turns out, non-theater people did find the acting process interesting. As did the theater people we'd invited. It's interesting to note that each group thought the other group might not find it as compelling as they did, themselves. Hm. Assumptions based on past experiences, anybody?

Scene is improv, but with a script. The words on the page are the only boundaries. Everything else is up for interpretation by the actors - many interpretations. Jay and Caroline will be given a different script for every performance, and they're not allowed to see Theme until after their last show. They have no idea what they're getting themselves into. *maniacal laugh*

Scene will be performed at MTH's Stage 2 in Crown Center. You don't even have to leave the space to see Scene AND Theme! We totally did that on purpose, for your convenience. (No, we didn't. But it's awfully nice that it worked out that way.) Show times for Variations on a Scene are:

Tickets for all shows are $10, with a one-time purchase of a $5 Fringe button, that's yours to keep forever! (All the cool kids have one.) Tickets and buttons are available at the Fringe office on the lower level of Union Station, and at all venues.

I'll be there, possibly at the bar, staving off my anxiety with Shirley Temples and popcorn. I'm so hard core.